Born in St Petersburg in 1975, Dmitri Makhtin started his musical education at the age of four with his parents, who were both professional violinists, and was admitted to the Music School for gifted children in 1981. In 1989, he won first prize at the Russian violonists’ competition. In 1990, he ob-tained a scholarship from the Young Musicians Foundation and the Idyllwild Arts Academy (Califor-nia), and studied with P. Hirshhorn and H. Krebbers. He is also a prizewinner at international com-petitions such as the Kloster Schontal, Niccolò Paganini, Louis Spohr, Tibor Varga, Montréal, Sibeli-us and Praetoria Competitions.

Dmitri Makhtin made his debut in 1997 in Paris with the State Academic Symphony Orchestra of the Russian Federation, under Yevgeny Svetlanov, and in 1998 in the United States with the Cleveland Orchestra, under Leonard Slatkin. Since then, he has performed with the Philharmonic orchestras of the Urals, Monte-Carlo, Marseille, Hong-Kong, City of Prague, Radio France and Saint Petersburg; with the Symphony orchestras of Swedish Radio, Euskadi, Singapore and Dallas; as well as the Orchestre National de Montpellier, Orchestre National de Lille or The European Soloists of Luxembourg. He has performed under Leonard Slatkin, James DePreist, Sakari Oramo, Alexander Dmitriyev, Jiří Bělohlávek, Jerzy Semkow, Yuri Temirkanov, Jean-Claude Casadesus, Alexander Vedernikov, Yevgeny Svetlanov, Alexander Sladkovsky, Robert Trevino …

Dmitri Makhtin has recorded at Warner Classics, with Boris Berezovsky and Alexander Kniazev, a CD of Shostakovich’s Trio n°2 and Rachmaninoff’s Trio Elégiaque n°2 – which won Choc de la Musique, Gramophone and Echo Classic Awards – as well as an album of Mendelssohn’s trios (winner of an Echo Classics Award). He has also recorded a CD of Tchaikovsky’s works with Boris Berezovsky and Alexander Kniazev, which was released on ARTE and NHK, and awarded a Diapason d’Or. His re-cording of Bach’s complete Sonatas and Partitas for Solo Violin, was released at Lontano records. In 2021, he recorded a CD dedicated to Godowsky et Szymanowsky “Valses Impressions” at Ligia with Muza Rubackyte

Dmitri Makhtin plays on a Jean-Baptiste Vuillaume violin from 1863.

“Here is a violinist who has chosen his own particular style, which places musical expression above strength, fine interpretation above sensation. Nevertheless he possesses extraordinary virtuosity, making his violin sing and dance.”
La Voix du Nord 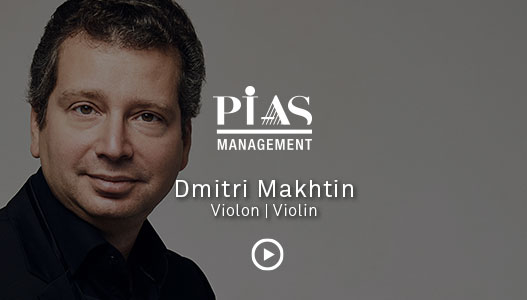 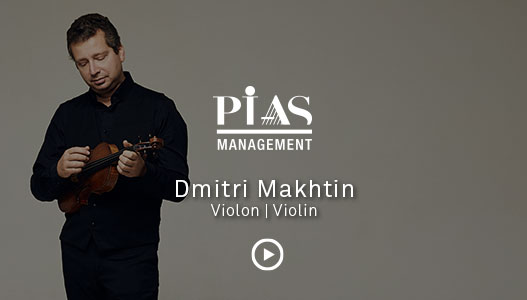 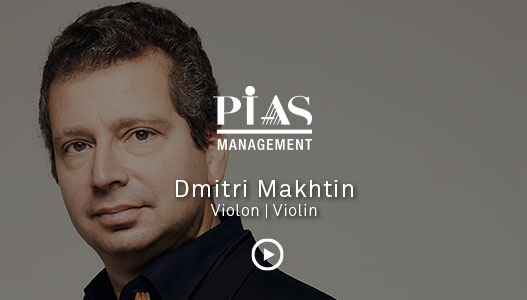