Depth of interpretation, clever dramaturgy and an infallible creative drive are what characterize Dmitry Liss as a conductor.

Dmitry Liss has been Artistic Director and Principal Conductor of the Ural Philharmonic Orchestra (UPO) since 1995. He has made the UPO, founded in 1936, into a leading, dynamic and creative symphony orchestra. Based in Ekaterinburg, on the border between Europe and Asia, it is a major cultural force in the Sverdlovsk region as well as a cultural ambassador on the international scene. Dmitry Liss has been invited to perform with the orchestra at the Carnegy Hall New York, Kennedy Center Washington, Bunka-Kaikan Tokyo, Concertgebouw Amsterdam, KKL Lucerne, Essen and Berlin Philharmonic, Victoria Hall Geneva, Brucknerhaus Linz, Vienna Konzerthaus and Tonhalle Zurich. He also has been a guest conductor at international festivals including the Beethovenfest Bonn, Bodensee Festival, Festival International de Piano de la Roque d’Anthéron, Radio France’s Montpellier Festival, Tiroler Festival Erl and has been regularly invited to La Folle Journée in France, Spain, Japan, and Russia.

Born in Balashov, he studied violin, clarinet, and musicology before beginning his conducting studies at the Moscow Tchaikovsky Conservatory under Dmitri Kitajenko, where he later became his assistant. At the age of 31, he took over as Chief Conductor of the Kuzbass Symphony Orchestra and was Associate Conductor of the Russian National Orchestra from 1999 to 2003. Dmitry Liss has won many Russian and international awards, most notably the honorary title of People’s Artist of Russia (2011), the country’s most prestigious award for achievements in the arts.

“Dmitri Liss let his wonderful orchestral soloists play and show their expertise, with the audience loving the first-class oboe, violin and trumpet soloists. The orchestra’s string section led the famous Ural sound, which under Mr. Liss’ baton was a great success.”
KULTURKOMPASSET.COM

“Liss had a modest demeanor, with a sensitive smile betraying a subtle yet irresistible charisma. (…) Then he brought the orchestra to a whirling crescendo practically from his seat. In the second half was Antonín Dvořák’s New World Symphony, which Liss filled with a long flowing breath.”
RP ONLINE

Dmitry Liss is an absolutely magical conductor. The audience was magnetised by his baton.
La liberté 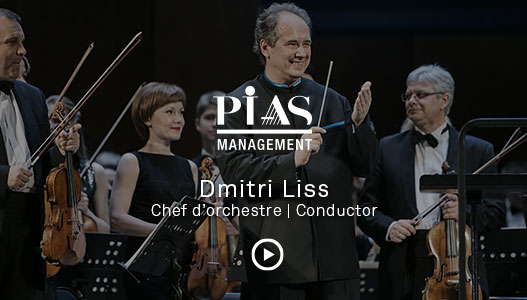