After more than forty years at the head of the Orchestre National de Lille that he created in 1976, Jean-Claude Casadesus, the founding conductor, continues to appear regularly with the orchestra while pursuing his international career. Under Jean-Claude Casadesus, the orchestra has toured around the world (32 countries on 4 continents – USA, Latin America, Africa, Russia, China and Kazakhstan) and has followed an exemplary policy of promoting and raising awareness of children and audiences who do not have access to music. He is also artistic director of the ‘Lille Piano (s) Festival’.

His discography of more than thirty CDs with Orchestre National de Lille was unanimously hailed by the public and critics. His latest recordings of “A Hero’s life” by Richard Strauss and Mahler’s Second Symphony received an enthusiastic welcome. They are followed by Mahler’s « Song of the Earth » and a CD dedicated to Henri Dutilleux, including ‘Les Métaboles’ and Symphony n°1.

An ardent defender of contemporary music, having studied orchestral conducting with Pierre Boulez, he initiated residencies for composers and since 2001 has chaired the famous association ‘Musique Nouvelle en Liberté’.

Before participating, alongside his great master Pierre Dervaux, in the creation of ‘Orchestre des Pays de la Loire’ of which he was assistant director, he was musical director of the ‘Châtelet’ in Paris at the beginning of his career before being appointed principal conductor at the ‘Opéra de Paris’ and the ‘Opéra-Comique’. His interest in opera led him to direct major productions at the ‘Festival d’Aix-en-Provence’, in Orange, Paris, Trieste, Monte Carlo, the ‘Opera Flandres’ and, of course, the ‘Opera de Lille’ (with a very memorable CARMEN staged by J.F. Sivadier)…

As a guest conductor, he conducts the Orchestre National de France and Orchestre de Paris as well as the orchestras of Bordeaux, Montpellier, Marseille, Monte Carlo, …

He is deeply committed to conveying knowledge and experience to future generations. He conductedfor three years the ‘Orchestre Français des Jeunes’ (French Youth Orchestra) and is regularly invited by the ‘Orchestre des Jeunes du CNSM’ of Paris for very popular concerts at the Philharmonie. In 2016, he was appointed as the director of the ‘Ecole Supérieure Musique et Danse des Hauts de France’ (School of music and dance of the Hauts de France). After appearing at Vadim Repin’s TransSiberian Art Festival in Novosibirsk, Jean-Claude decided to found with his violinist friend, the first European TransSiberian Festival, inaugurated in December 2019, which was called “Festival Transsibérien Lille Station Jeunesse” – an event drawing the best musicians in youth orchestras from diverse backgrounds as well as famous soloists such as Repin, Kniazev, Angelich…

Jean-Claude Casadesus has also written two books, “Le plus court chemin d’un cœur à un autre” (the shortest path from one heart to another) published by Stock and “La partition d’une vie” (the score of a life) published by ‘Éditions Écriture’.

“Jean Claude Casadesus applies the sound he has been defending for decades, that of limpidity and clarity, without missing a real compactness of the ensemble”.
Resmusica

“A fascinating realisation which is also a jubilation, which is also a confession and testimony of a great conductor whose humanist and fraternal gesture brings us to the final illumination. An irresistible achievement. The sincerity of the gesture is touching; the activity of the journey through the 5 symphonic sequences is in keeping with the fraternal quest of one who has always been inspired by sharing and a sense of community. Magistral”.
Classicnews / CD Mahler – La Seconde Symphonie

“Jean-Claude Casadesus, from rigour comes freedom. The French conductor has built a career as a committed musician for music lovers and the uninitiated alike, to whom he wants to offer the best of his art.
Emmanuelle Giuliani / portrait in La Croix 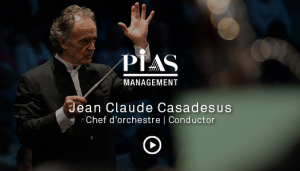 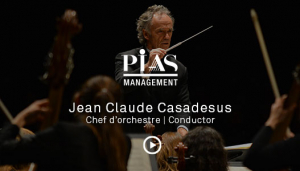 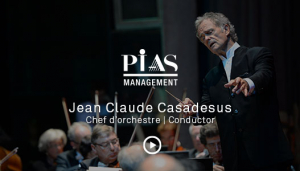