Alexander Kniazev is the worthy successor of Mstislav Rostropovitch and one of Russia’s leading contemporary cellist.

He is a regular guest of the festivals of December Nights in Moscow, White Nights in Saint Petersburg, Folles Journées de Nantes/Tokyo, Nuits du Suquet (France), La Roque d’Anthéron (France), Touraine Music Festival (France), Menton Music Festival (France), Moments Musicaux de la Baule (France), International Festival of George Enescu in Bucharest, Jerusalem International Chamber Music Festival, Povoa de Varzim Festival (Portugal) and of the prestigious Tanglewood, Lugano, Amstel Festival of Amsterdam and Salzburg festivals… He plays chamber music with Nikolai Lugansky, Evgeny Kissin, Andrei Korobeinikov, Elisabeth Leonskaya, Boris Berezovsky, Plamena Mangova, Mario Brunello, Ivan Monighetti, Dimitri Makhtin, Elena Bashkirova and Jean Guillou (one of the greatest French organists) with whom he maintained very close ties for many years, and who composed an organ concerto for Alexander Kniazev .With Vadim Repin and Andrei Korobeinikov, he performs in major concert halls around the world. Resmusica had the following comments : the three talents (Vadim Repin, Alexander Knaizev and Andrei Korobeinikov) form “a trio combining the sumptuous and the brilliant, producing a result of total harmony. We are fascinated by their ability to listen to each other, by their capacity to join forces to transmit the meaning of the musical work. (…) Overwhelmed and enthusiastic, the audience gave a well-deserved standing ovation.”

As an ardent defender of contemporary music, Alexander Kniazev premiered in Moscow Alexei Rybnikov and Igor Raykhelson’s Cello Concertos (that were dedicated to him). Morevoer, Alexander Kniazev also preforms in trio with Nikolai Lugansky and Sergej Krylov in many cities of Europe.

Alexander Kniazev is an exceptionally gifted musician, who has many talents and he is also an organist. In 2017, he was invited to perform a recital on the famous organ of the Saint Louis des Invalides Cathedral in Paris. He has also amazed the Russian audience with his recent appearance as a pianist at the Moscow Philharmonic and other major venues in Russia

In 1995, Alexander Kniazev was appointed as a professor at the Moscow Conservatory and he regularly gives masterclasses in France, Spain and Korea. He is also a member of the jury at many international cello competitions.

Alexander Kniazev has made many CD recordings with various companies: at Melodia – an album of Ernest Bloch and Miaskovsky’s cello concerto with Evgeny Svetlanov and the Russian State Symphonic Orchestra; at Philips – Max Reger and Jean Guillou; at Warner Classics – J.S. Bach, Chopin and Chostakovitch with Nikolaï Lugansky, as well as the trios by Chostakvitch Rachmaninov and Mendelssohn with Dmitri Makhtin and Boris Berezovsky, and a Tchaikovsky album with the Moscow Chamber Orchestra and Constantin Orbelian; at Lontano/Warner – Dvořák Cello Concerto with the Tchaikovsky Symphony Orchestra of Moscow directed by Vladimir Fedoseyev ; at Fuga Libera – Franck and Ysaÿe with Plamena Mangova; at Mirare – Brahms with Andreï Korobeinikov and at Melodiya , Bach’s Sonatas for Cello and Organ with Jean Guillou (“ECHO CLASSICS” Award). He also recorded a Chostakovitch album with the Yokohama Sinfonietta Orchestra under the baton of Kazuki Yamada. As an organist, he recorded, for “Piano Classics” an album of works by Bach which has been broadcast in the prestigious Cathedral of Riga, as well as J.S. Bach’s Goldberg Variations published by Exton and Bach’s 18 Leipzig Chorales published by Melodiya.

“A distinctive, charming personality who advocates above all open-mindedness and seeks the expression of the soul behind every note.”
Le Monde de la Musique 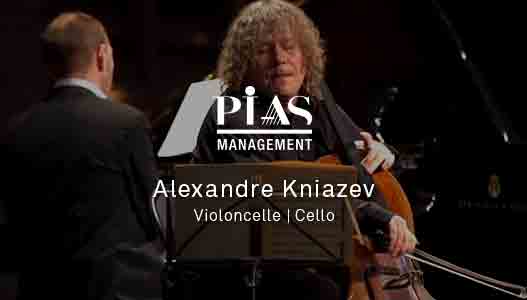 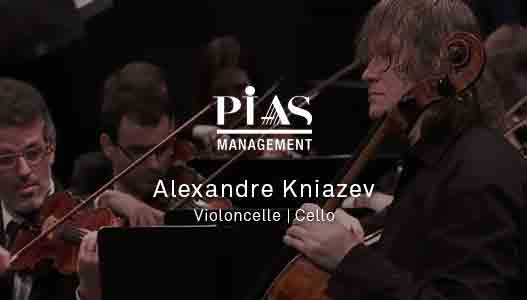 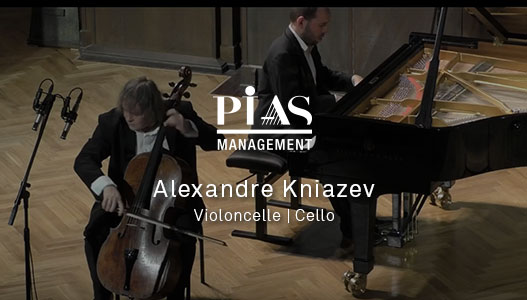